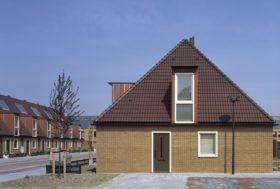 3 August 2016 – Ten years after completion of the so-called Starter Homes in Pleinen, Hoofddorp the project is topical again. This month, the magazine Architectural Review presented the dwellings for first-time buyers as an exemplary housing estate in their issue ‘House + Housing’.

The project combines low-cost terraced and semidetached houses. At the time, the terraced houses were built to lower construction costs then any system builder could offer. Architectural Review asserts:

‘The two parts of the estate are spatially segregated, which is not ideal, but they are formally united by the architect’s sophisticated abstraction of vernacular domestic tradition. The pitched roofs are penetrated by elongated dormers creating an impressive serial effect, especially along the facades of the terraces. This combination of traditionalism and Modernism brings out the potential for abstraction lurking in the former and the cosiness sometimes felt to be lacking in the latter: what Benjamin would call a ‘dialectic image’ harking back to the workers’ houses designed by Heinrich Tessenow in the 1910s and ‘20s.’

Now that cost efficiency is felt to be important again for housing design, it is a boost that a prestigious magazine such as AR praises the Starter Homes for their architectonic and urbanistic qualities.