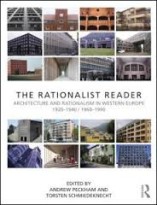 The Rationalist Reader incorporates a documentary collection of writing on rationalism in 20th century architecture, providing an accessible introduction to the subject, direct insight into the thinking of individual architects and their critics, and a current re-evaluation of the context from which they emerged. The two sets of ‘documents’, identified with the periods 1920–1940 and 1960–1990, are arranged under comparative headings, allowing the reader to establish correspondences between the key themes of rationalist architecture.

Hans van der Heijden wrote a postscript to the reader under the title The Heroism of Rationalism?, in which he discussed the actual value of a rationalist design attitude.

The Rationalist Reader was edited by Andrew Peckham (Westminster University, London) and Torsten Schmiedeknecht (Liverpool School of Architecture). The Lakerlopen housing is on the cover, next to Berlage’s stock exchange building.