In a period of 11 years, HvdH designed 170 dwellings and a medical centre in the village extension De Grienden. The dwellings form the public space in the axis of the urban scheme: a sequence of two courts on either side of a square which stretches into a neighbourhood park.

The buildings have been constructed in four phases and within six different commissions. In all stages of the project, the simple tectonic choice for prefabricated concrete lintels and gutters and contrasting brickwork shells provide consistency between the different parts of the scheme.

Four urban villas are located in the neighbourhood park. The apartments sit around lift lobbies which are fully glazed at the entrance side. The lobbies were finished with stone floor tiles. The walls are faced with bricks. The vertical joint were left unfilled in order to allow for sound absorption by the thermal insulation behind and reduce reverb to a minimum.

The villa closest to the old village road has a health centre at ground floor level. An arcade symbolises its public significance.

The project has been widely published including the Phaidon Atlas of World Architecture. 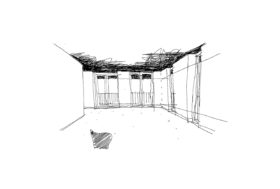