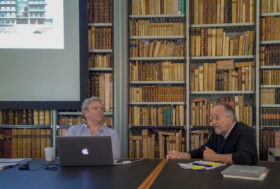 23 April 2018 – The architectural historian Werner Oechslin invited me to contribute to the colloquium Civilian Architecture. We met in Werner’s library in Einsiedeln, Switzerland. Surrounded by an impressive amount of antique books, an international company of architects and historians discussed the history and topicality of Zivilarchitektur, a term not to be confused with ‘civil engineering’. Rather, it refers to ‘civic architecture’, everything in architecture history which needs to be separated from military or nautical architecture. It is far from new that the position and public meaning of architecture is debated.

I presented the publication on the Piraeus Project which appeared last year. A group of ten colleagues, explored the possible design attitudes within the current city and construction industry. In Switzerland there proved to be considerable appreciation for our critical approach of those topics. The considered, culturally conscious and understandable designs for common tasks like housing and schools resulting from that clearly resonated with the theme of civic architecture.