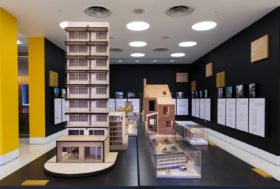 26 February 2018 – Last weekend I was in New York for the opening of the exhibition ‘Social Housing, New European Projects’ in the Center for Architecture. My contributions were a large model of the refurbishment of the Knikkers in Rotterdam Ommoord and a key note lecture at the seminar. Two things struck me.

As if the ‘old roles’ of the architect do not suffice anymore, the participating architects were searching for ‘new roles’. You hear a lot about that in the Netherlands too. Those new roles often consist of activities which architects undertake at fields that are adjacent to the design discipline: communication, organisation, entrepreneurship. Personally, I think that one the one hand it is rather healthy that architects do not lock themselves up in their own world, but on the other hand this does not seem to be reason to talk about a whole new discipline. It is said that the de renaissance artist Filippo Brunelleschi was the very first modern architect. He possessed exclusive knowledge, because in the division of labour at the end of the middle ages he was the only one being able to span the gigantic dome of the Florence dome. According to the legend, Brunellischi was a wonder of communication, organisation and enterprise as well. But he could do things others could not: conceive a large span, fit that into the existing church and elevate the dome to beauty.

A totally different observation was that affordable housing has almost completely stagnated. Maintenance and control are already difficult. Renovation is an unknown expertise. New build is left to the market, which gratefully uses cheap units to fill difficult spot in projects and tries to supply them with separate entrances. The seminar’s moderator, Susanne Schindler, talked about the need of a shared language when working on accessible (so not: social) housing. I realised how much the Knikkers project in Ommoord was the result of a high degree of consensus between the developing, building and designing stakeholders in the project. Institutes such as KEI, the ‘Knowledge Center for Urban Renewal’ were important in the years after 2000. KEI acted as a thinktank, but also succeeded -indeed- in de formation of a language which was except from politically correct also operational.

Are the architects of the urban renewal capable of doing something which others cannot?

With support of the Creative Industries Fund NL.