Upon invitation of architecture centre AIR HvdH delivered a lecture about the Museum Boijmans Van Beuningen at the conference Looking at Boijmans which took place on 10 december 2019. When HvdH curated the debate series ArchitectureCases on behalf of AIR, the Rotterdam brick tradition of the interbellum was studies together with the Rotterdamse collegues from the city. That tradition is not well-known, the 1940 bombing has contibuted to that. The Boijmans building which was completed in 1936 was the culmination point of that tradition. Its designer and City Architect Ad van der Steur played a main role in the design of a comfortable brick city at which Rotterdam was building at the time. ArchitectuurCases was the starting point for the fascination of HvdH for the Boijmans building.

AIR asked HvdH to tell about Van der Steur’s design for the original Boijmans. His angle was the one of the practising architect. Van der Steur experimentented with the double court type which was in vogue in the Italian renaissance in the conception of urban domestic buildings, palazzi. In any case, the building is conceived around as a structure around a representative square court and an expedition court which is far less pure. The conclusion is that many of the alledged shortcomings of Boijmans can be brought back to the way Van der Steur dealt with the double court type. 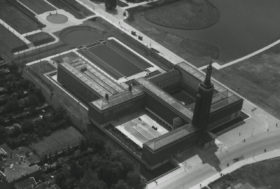 Related publications and videos HvdH contributed to are: