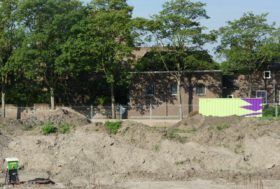 18 July 2014 – Today I have assessed the brick samples on the construction site of Kloosterbuuren. The brown-greyish tones establish a nice anology with the masonry walls of the nearby church and monastery. Contractor Groothuis will build two blocks first. Most piles have been drilled and the foundation rafts of the first block have been completed. As in the Morgenzonlaan project the contractor will use a system of prefabricated walls and floors. After the summer holiday the first elements will arrive on site. Directly afterwards the construction of the brickwork facade sleeves will commence.

It is intended that the three other blocks will start on site later in 2015. The reconstruction of the public territory will follow accordingly.