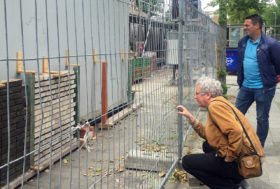 4 June 2019 – Yesterday we have assessed the mock-ups of the Persoonshaven facades. The contractor had provided variants with different mortars and joints. Together with Riki Aarden of Woonstad and Bauke Vink and Leon van Dijk of Bouwbedrijf Vink we opted for light joints in the light brickwork and darker ones in the green and orange bricks. Daas Baksteen produced green bricks with an artificial joint, making it possible to suggest tile bond whilst building the walls in regular stretcher bond. The batch of orange bricks is more in colour than we are used to. Fortunately, there are also relatively many blue sintered bricks between them. If we lay these with the sintering to the front, we will still get lively facades.

Leon had a good idea for the expansion joints and proposed a smart solution for a set screw in the steel railings. Together we decided to move the crawl space venting a bit. It was an affirmative meeting, there upon South.