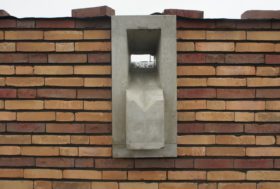 24 October 2014 – The site works of the dwellings at Rotterdam Oranjeboomstraat have arrived at roof level. The roof edge contains prefabricated concrete gargoyles. This has been successfully developed in earlier projects such as Morgenzonlaan, Drents Dorp and Kloosterbuuren. Current building regulations demand such gargoyles. By using prefabrication and by stressing their forms they become ornamental in the architecture. Each project gets its own unique version. At Oranjeboomstraat I have proposed a plastic grey block which lines with the concrete roof coping which is also grey. The spout projects from this block.