The Bloemenbuurt neighbourhood in Krimpen a.d. IJssel was built in the 1970-s to the so-called Radburn Principle. This means that the dwellings sit around a large park which is completely car-free. The ring road running around the park serves parking lots. The front doors of the dwellings are at the parking side. The rears are all linked to the greenery.

Due to foundation problem, part of Bloemenbuurt had to be demolished. This part consisted completed of identical terraces. A new urban plan was made in which apartments en row houses in different commercial categories were mixed. A small neighbourhood amenity was added as well. Because of increased parking pressure, the Radburn Principle is, as it were, turned inside out. Cars are stored away at parking courts at the rear of the dwellings and remain invisible from the streets. The fronts of the dwellings sit at greenery which is linked to the park. 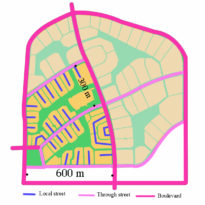